The Rise and Fall of San Cristobal Da la Casa 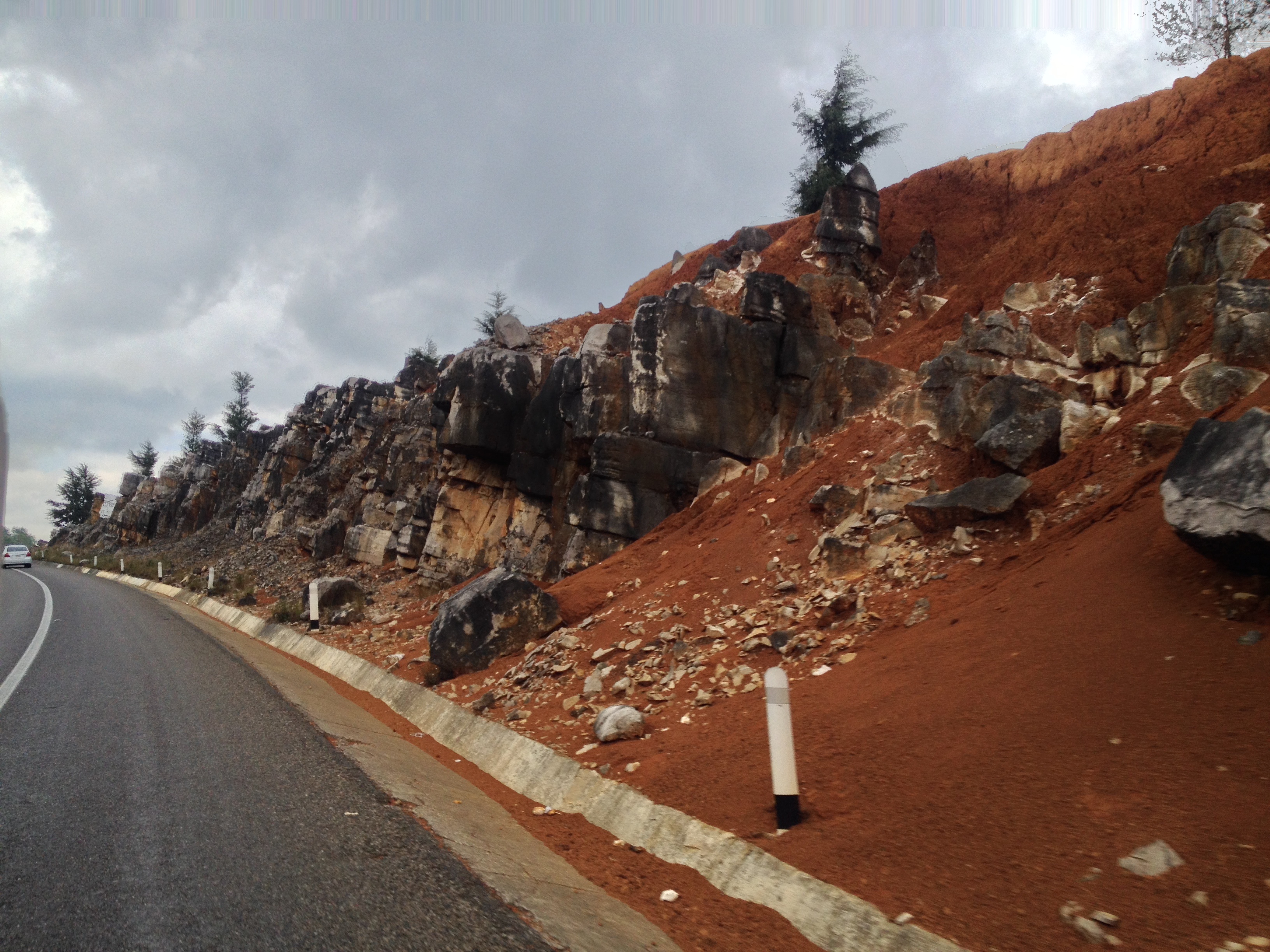 San Cristobal da la casa is located at a high altitude and has what I consider great temperature, very temperate and cool. I was really excited to meet more of Mateo’s family, from what I have heard from Mateo, Lander is really great and we are both excited to meet Laura Lander’s partner and Inada their 7 and a half month old daughter. It has been great meeting Mateo’s Mexican family, every one has been so nice and welcoming of us! It is a Holliday week, the week before Esther so there are many cars out on the road and San Cris is poplar place for people to vacation. Also there are added patrols out as well. Much like we experience on Fourth of July, a ton of extra people everywhere. Lander and Laura spend a lot of time selling their hand made sliver and macramé jewelry during the two Holy weeks due to the amount of traffic that goes on in the city. We were about 6 kilometers away when we heard a breaking noise, the gas hadn’t run out, the tires were still intact, our chain was good. It was the engine defiantly, oh geez the engine was bonkers again. For only 400 hundred pesos we sure did get far! We pushed the bike until it was just around the bend on the side of the highway. The two options we had were flag down a truck that would take our bike and us into San Cris to find Lander or possibly push the bike up the hill until it started on a down hill slope and hop on it and ride on a non running bike into town. Our Mexican phone had no reception, there was no calling Lander for assistance, and he and Laura just sold their Guatemalan licensed VW bus a couple days before we arrived. Many trucks were passing, but it was the same as trying to flag down some one on I-5, not an easy task when cars are zipping by you. At least we were just around a corner so we could see who was coming around it as they neared. We spot a white truck, bahh it looks like there is something in the bed of his truck. Then he turned on his emergency lights, ah a tow truck. And on the side it said green angles, a free towing service enlisted by the state to get people off the road. This all sounded awesome but he tows cars not motorcycles. He is pretty confident that we can get the motorcycle up into the back of the truck, this is Mexico. 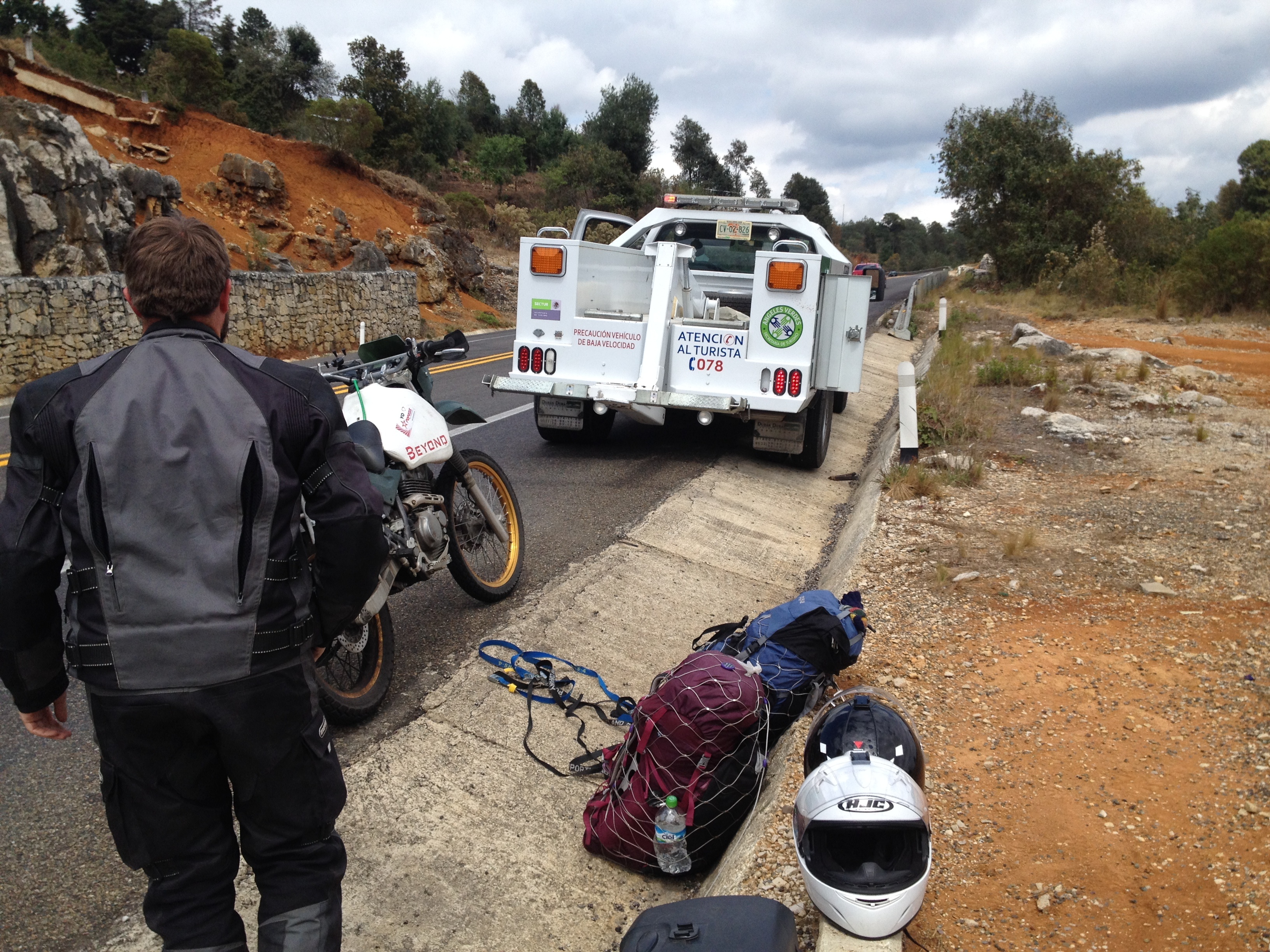 I was not so sure the truck bed is nearly as tall as I am, and there is a built in towing device in the back. Stripping the bike of the bags, we all joined together to push/pull the bike into the back of the truck. No easy task but no other options. The truck driver man was a skinny older guy, then there was me, then there was Mateo, Mateo did most of the pushing from under the bike and I did pulling/maneuvering from in the truck and little truck driver man helped. Eventually the bike was in the truck with our back packs and Mateo, I road up front with what ever remained of our gear. 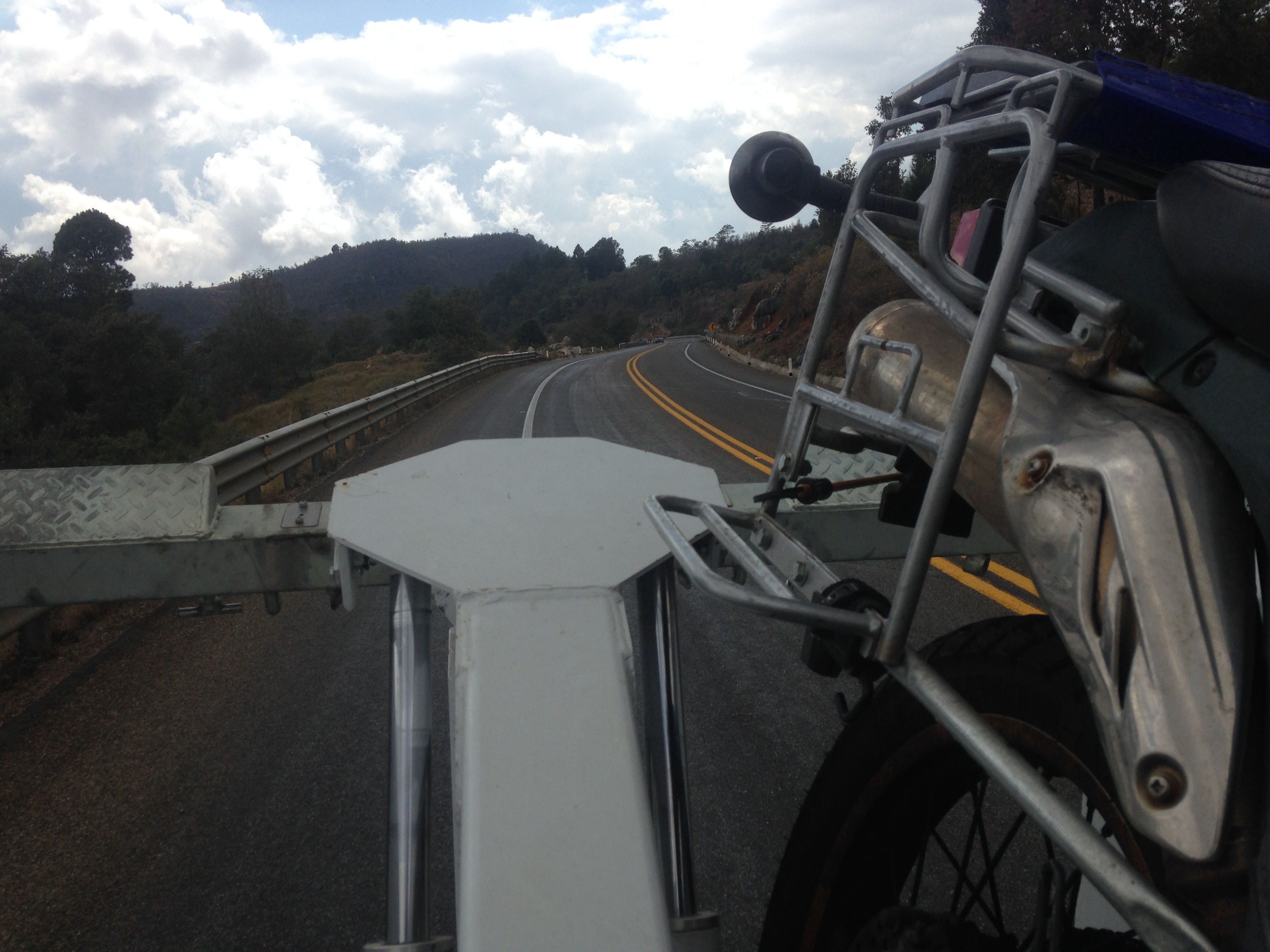 Once we were in phone reception at the edge of San Cris and we had the truck driver talk with Lander to drop us off close to the house. After giving him some information we where dropped off in San Cris and Lander said he would be arriving soon. It cost us nothing for the tow, and the truck driver man wouldn’t take a tip either. We where so blessed to have that tow truck driver man show up and tow us, we weren’t on the side of the road for more than a five minutes. 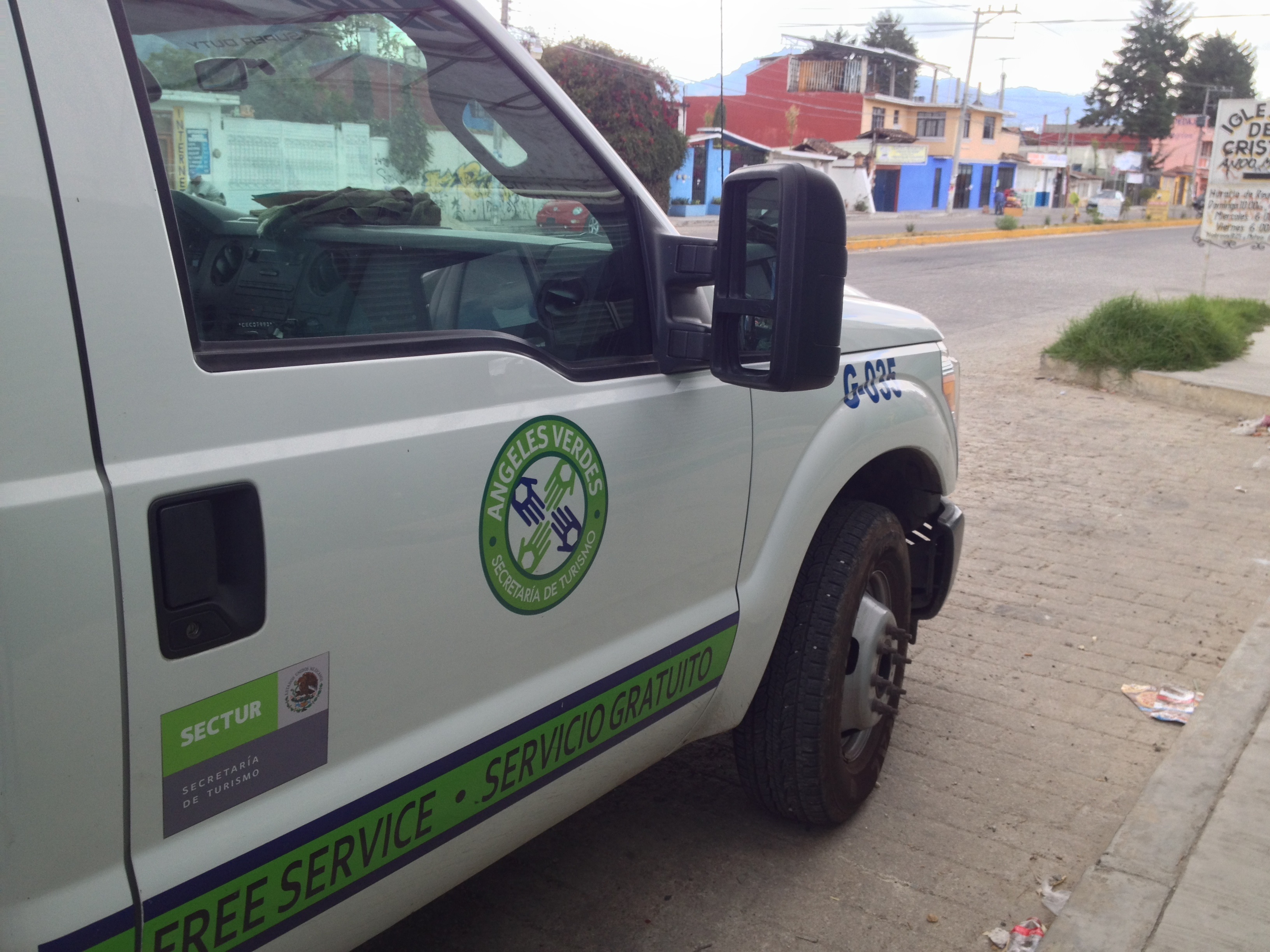 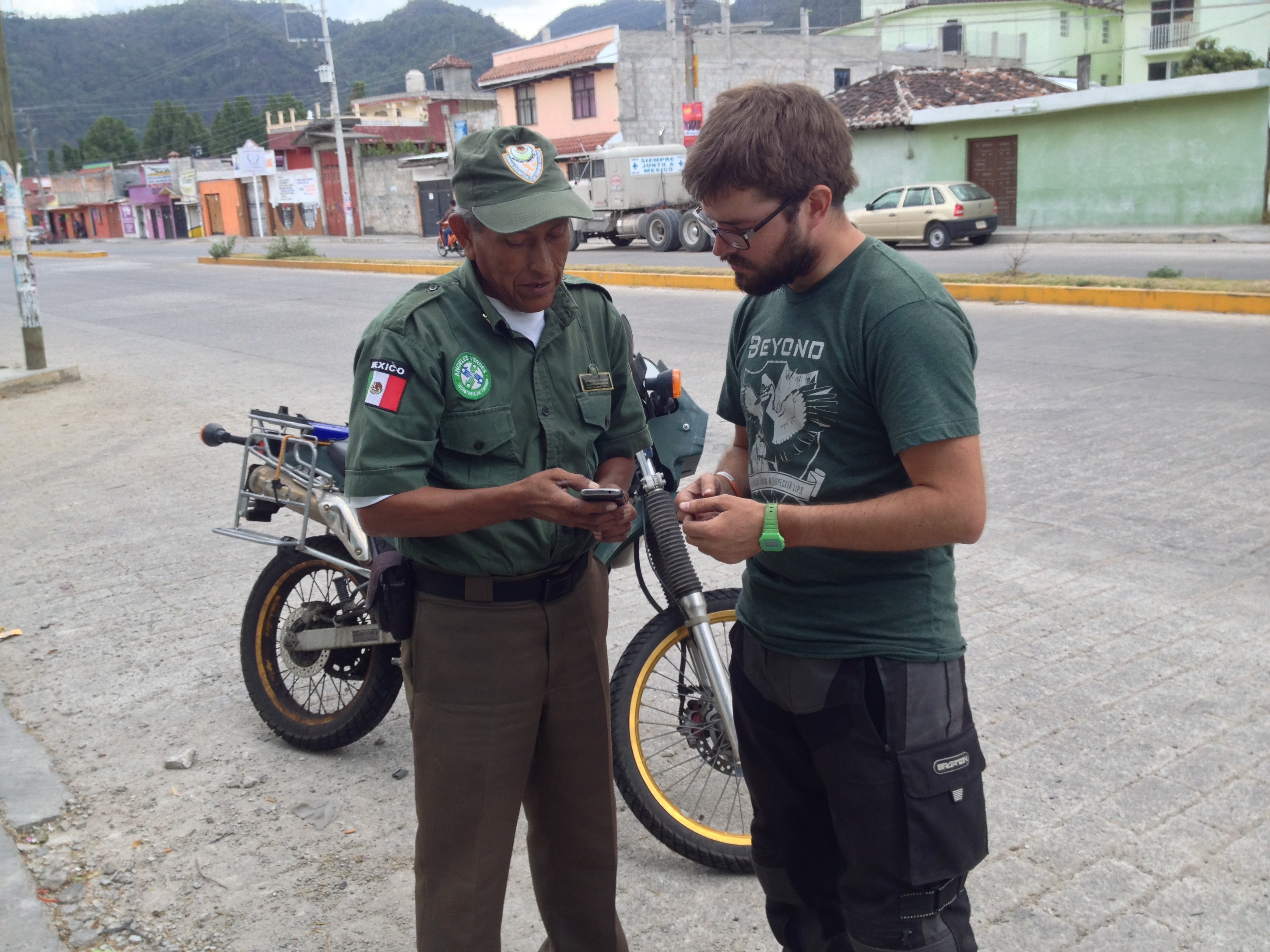