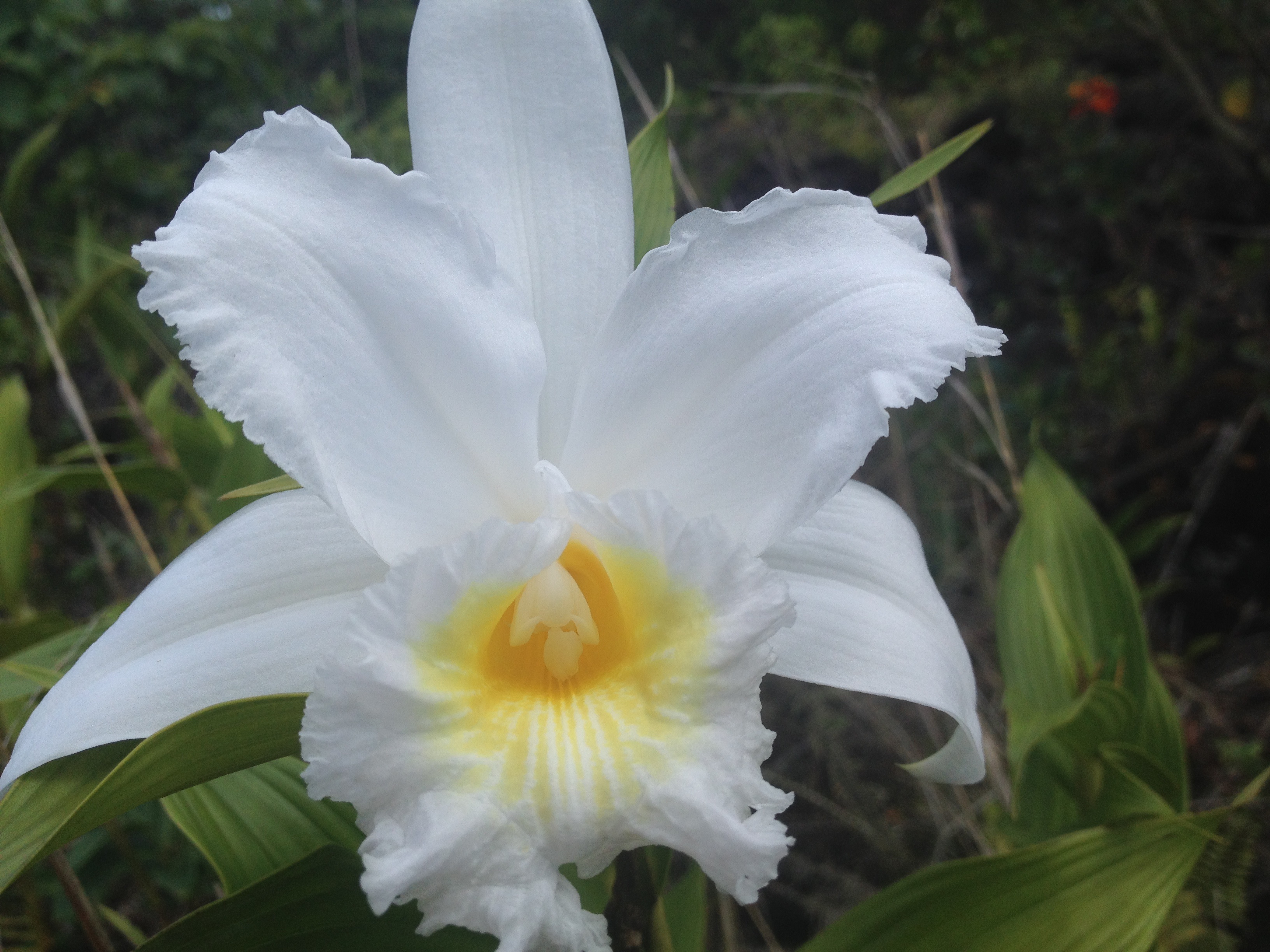 I love waking up to the sound of howler monkeys and birds. Oh and not to mention a giant Volcano outside the tent door. This camping spot is amazing, to my delight where we are camping is a ten minute walk from the hostel itself and there are composting toilets. We are surrounded by farm area as well, and the walk is through jungle, yesterday we caught sight of monkeys swinging from tree to tree with baby monkeys on their backs. Wow!! 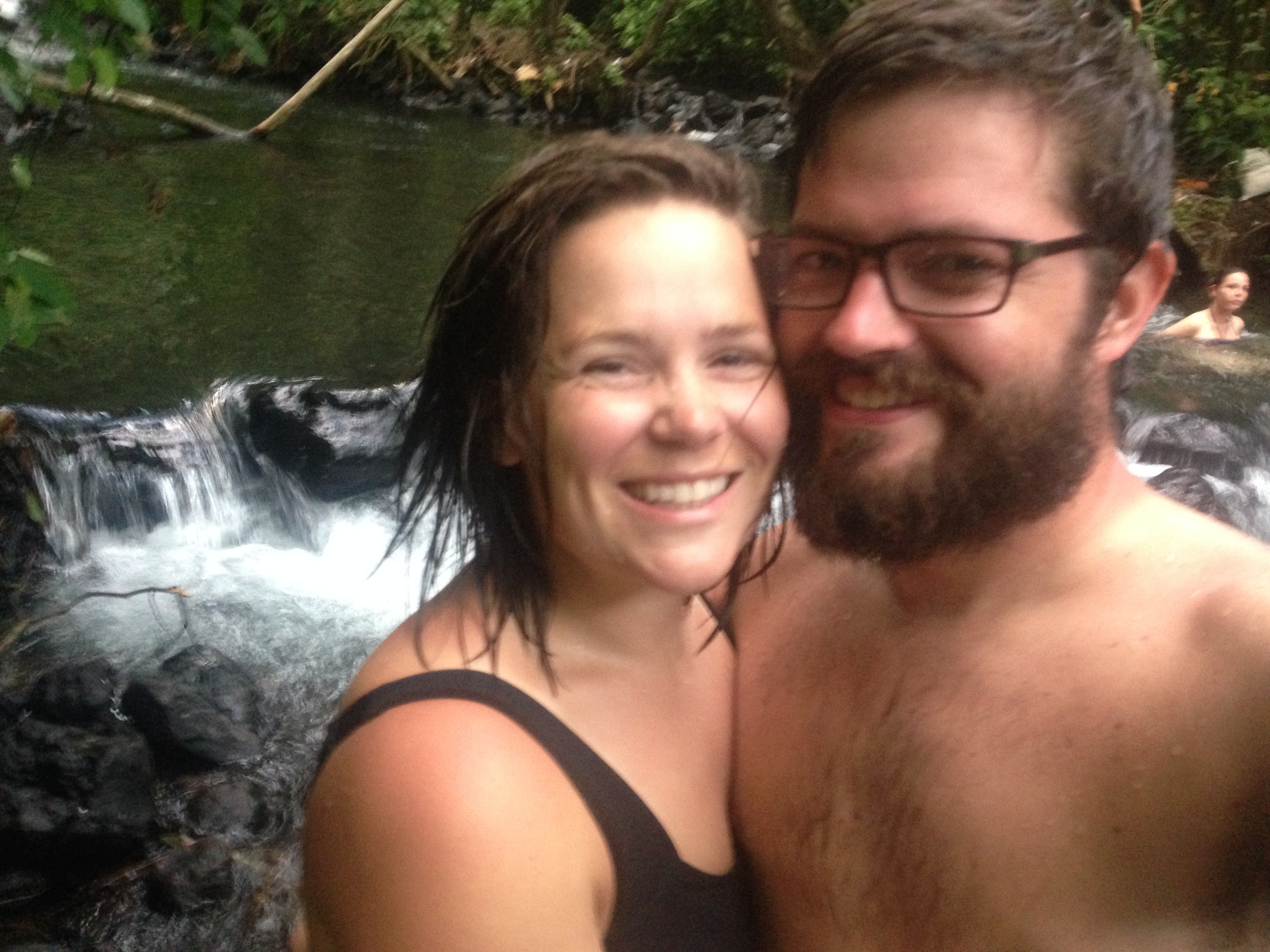 We also caught the shuttle down to some hot springs that are heated from the near by volcano. We took the local route with the springs and went down under the bridge to hop in to the hot springs. My skin is so soft today, and I was told that the springs make you look younger. All this sun damage has been reversed, hallelujah, and thank you volcano gods. Now please don’t erupt on us. 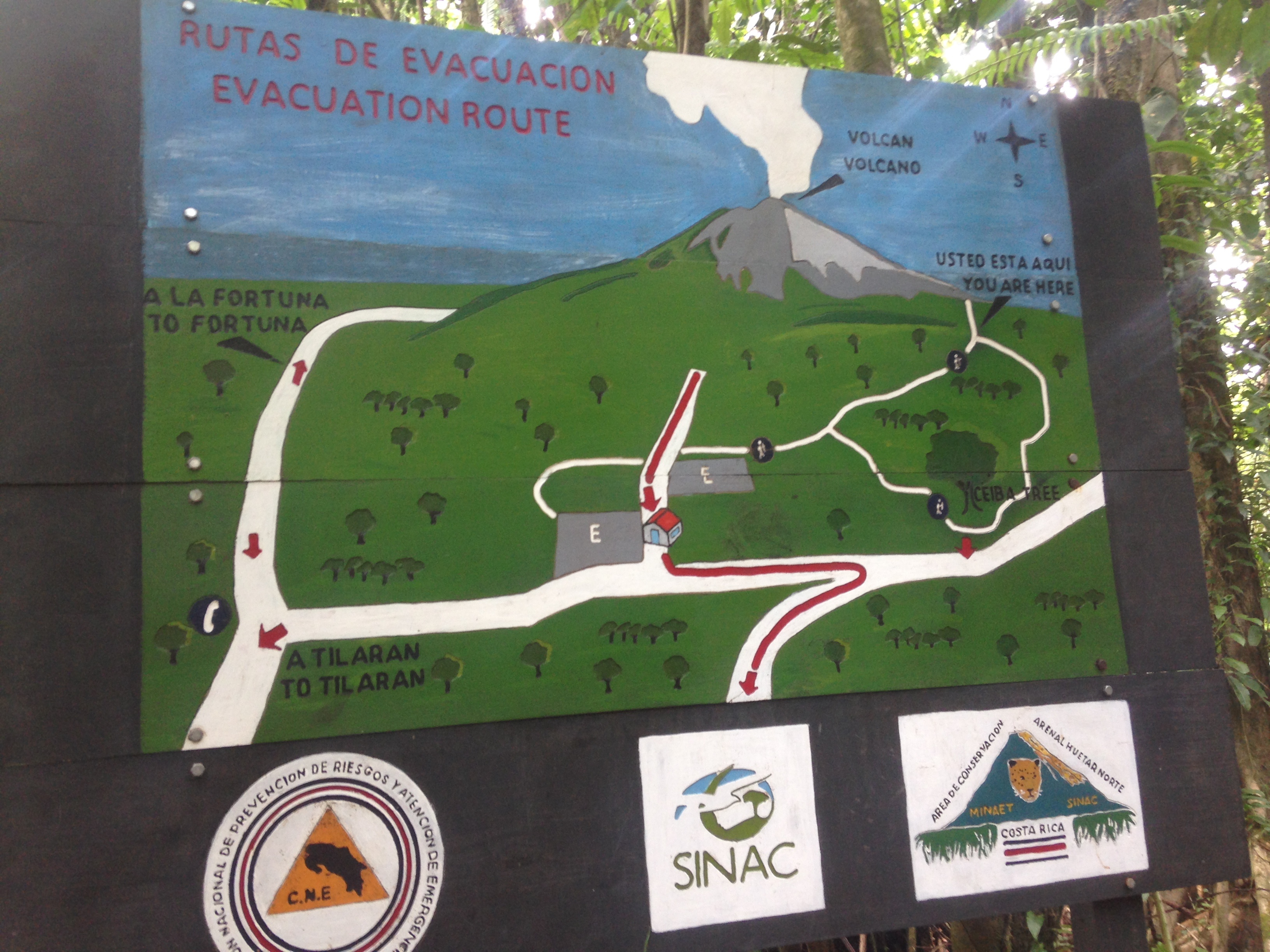 We caught the shuttle to the entrance of the national park, we really wanted to catch it to the Arenal obseveratory but we had a miscommunication. We hiked the trails of the park they were short and full of people, but with great views of the volcano. I liked the signs that say enter at your own risk active volcano.  In 2008 there were 4 evacuations of the surrounding area due to activity and hazardous gases from Arenal. Mateo found a trail in his GPS app on his phone. 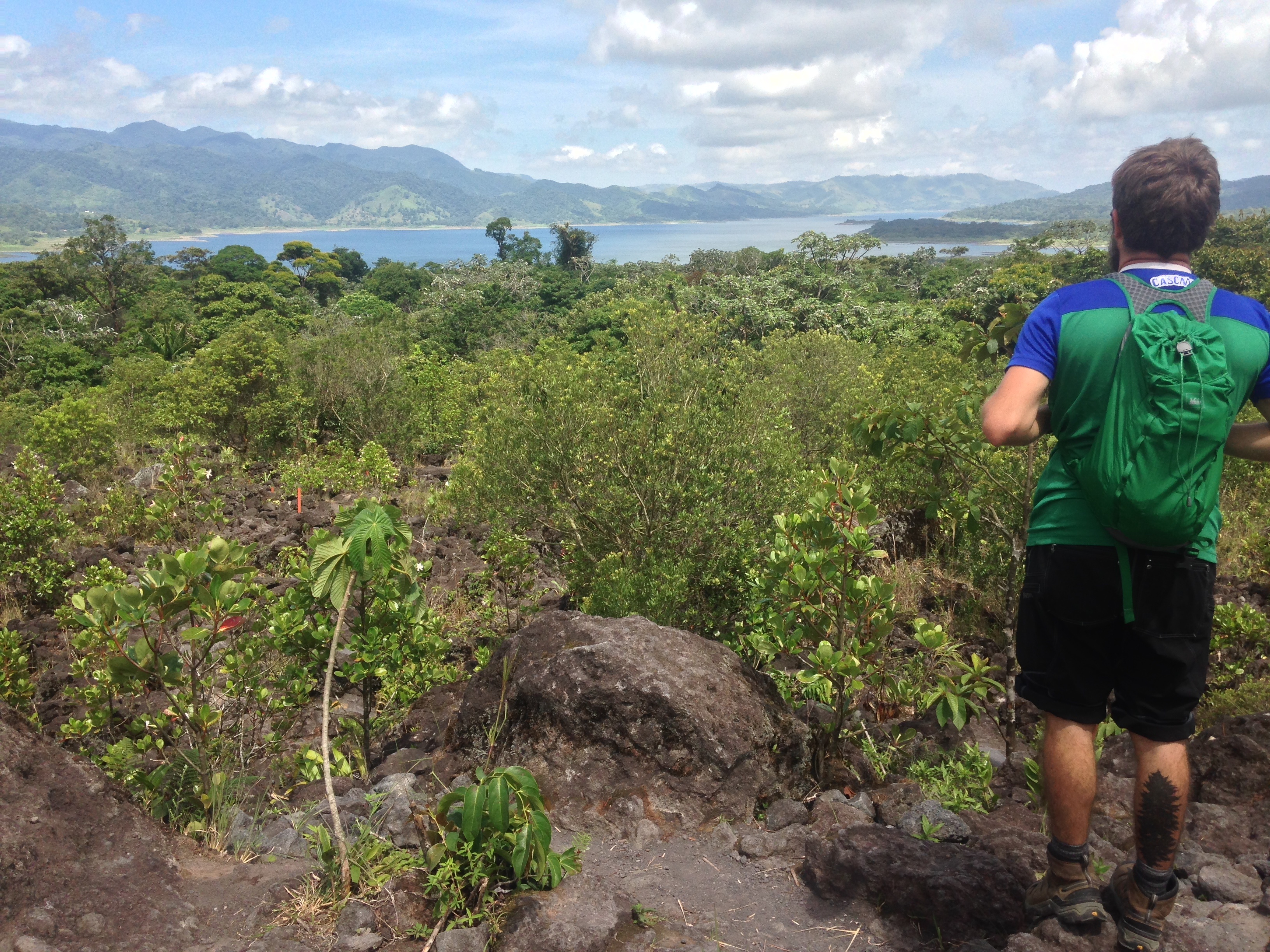 Once we arrived at the end of the park trail and the beginning of the GPS trail is when the bush whacking started. There really was no trail, some areas did clear up and gave us just enough hope we were heading in the right direction. This trail would lead us to the Toucan trail which was close to where we wanted to be in the first place. If not for the GPS I’m sure we would of ended up a story of two lost hikers at the base of the Volcano. 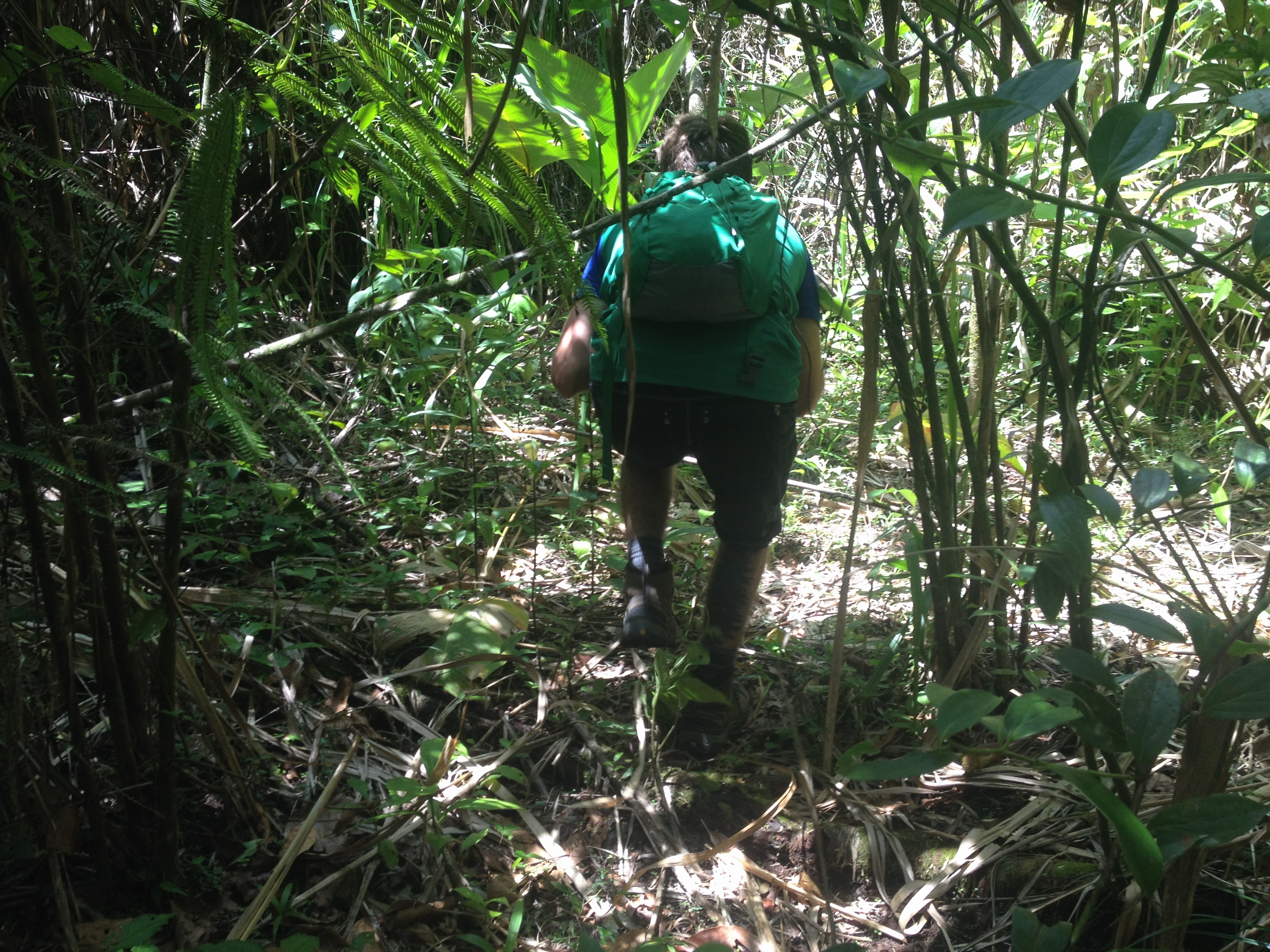 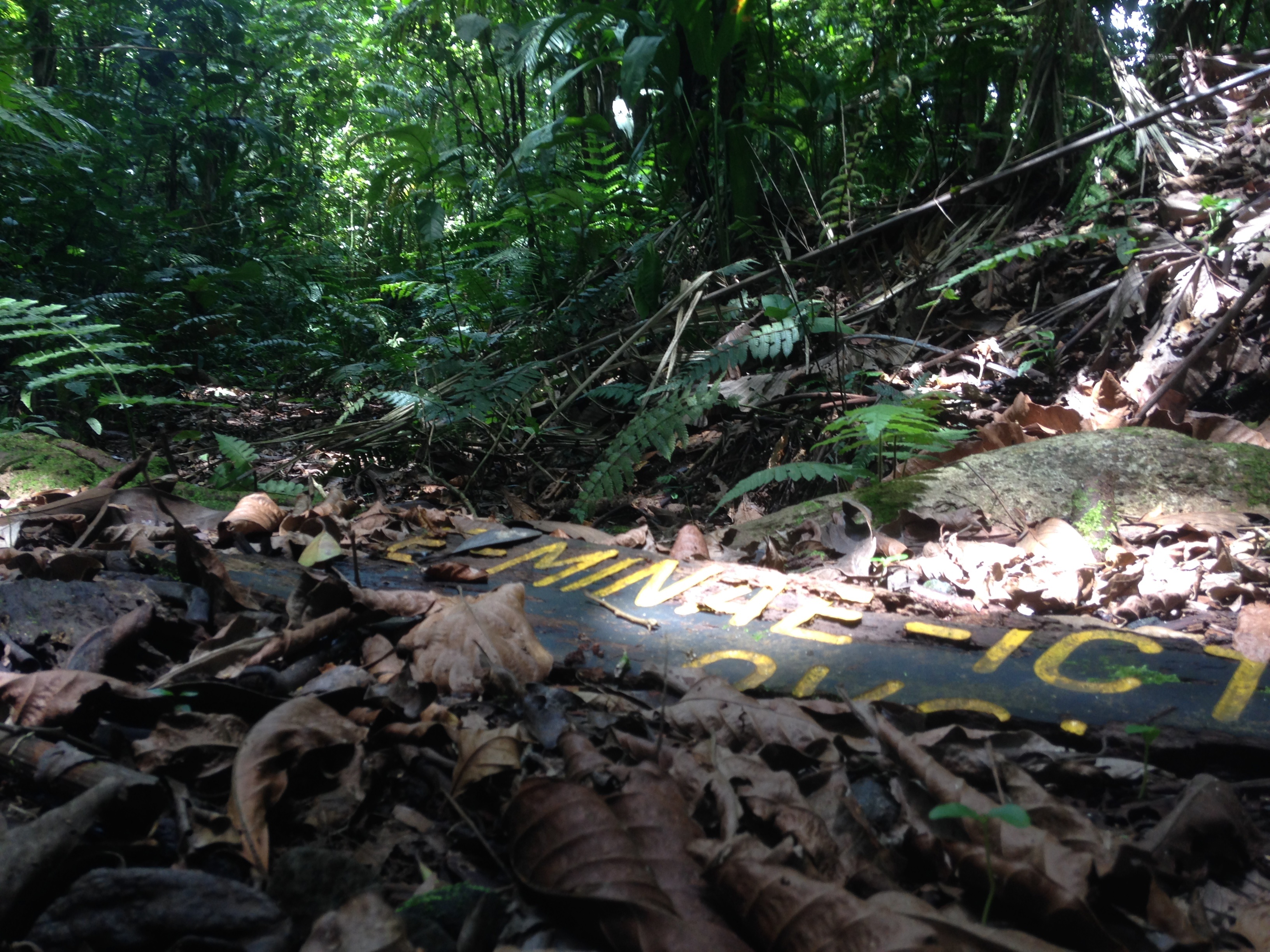 We continued to crawl under brush and over logs, I was hoping not to step on a snake or find myself bitten by a spider. We arrived at the Toucan Trail covered in sticks, scratches and sweat. 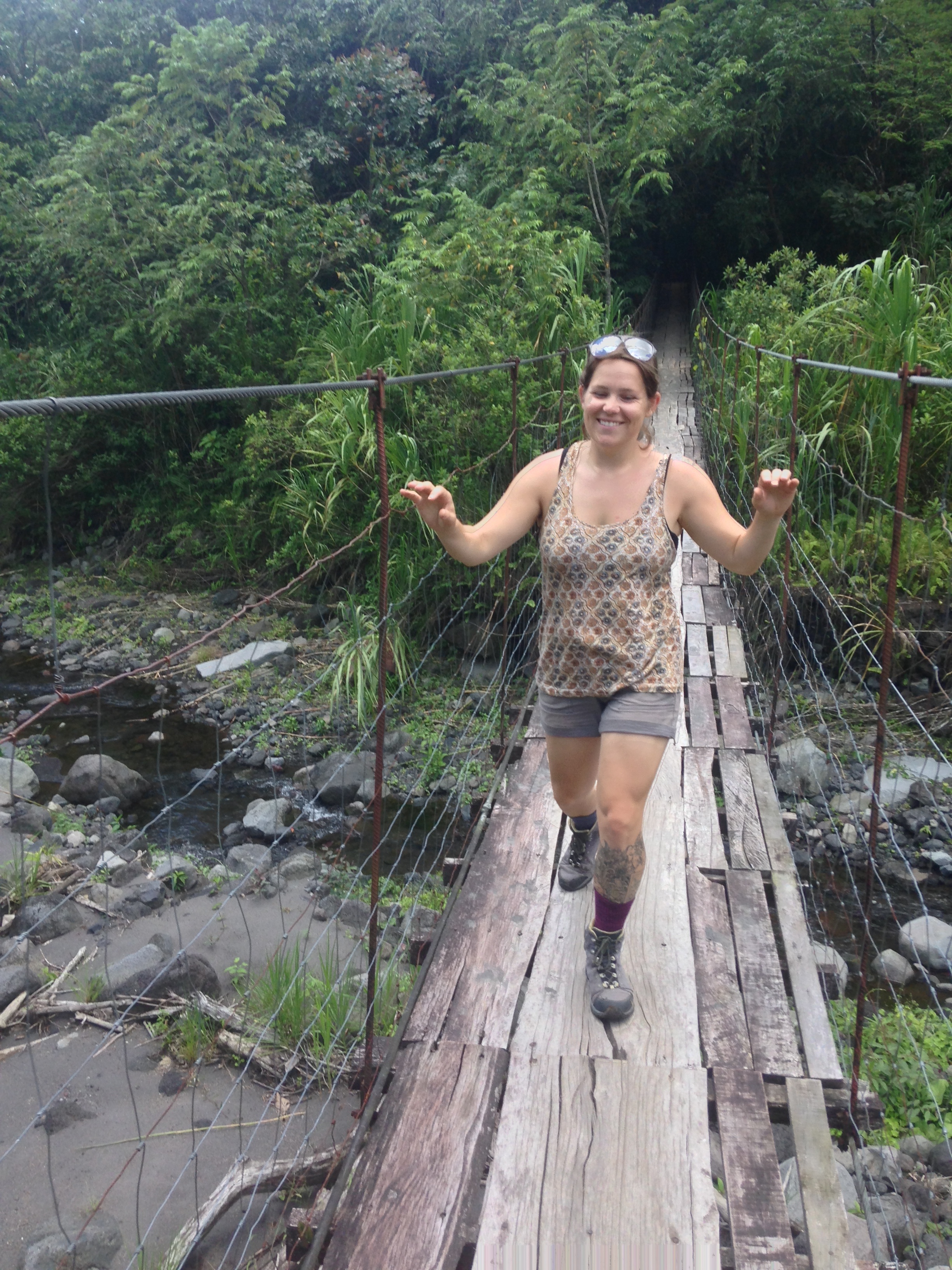 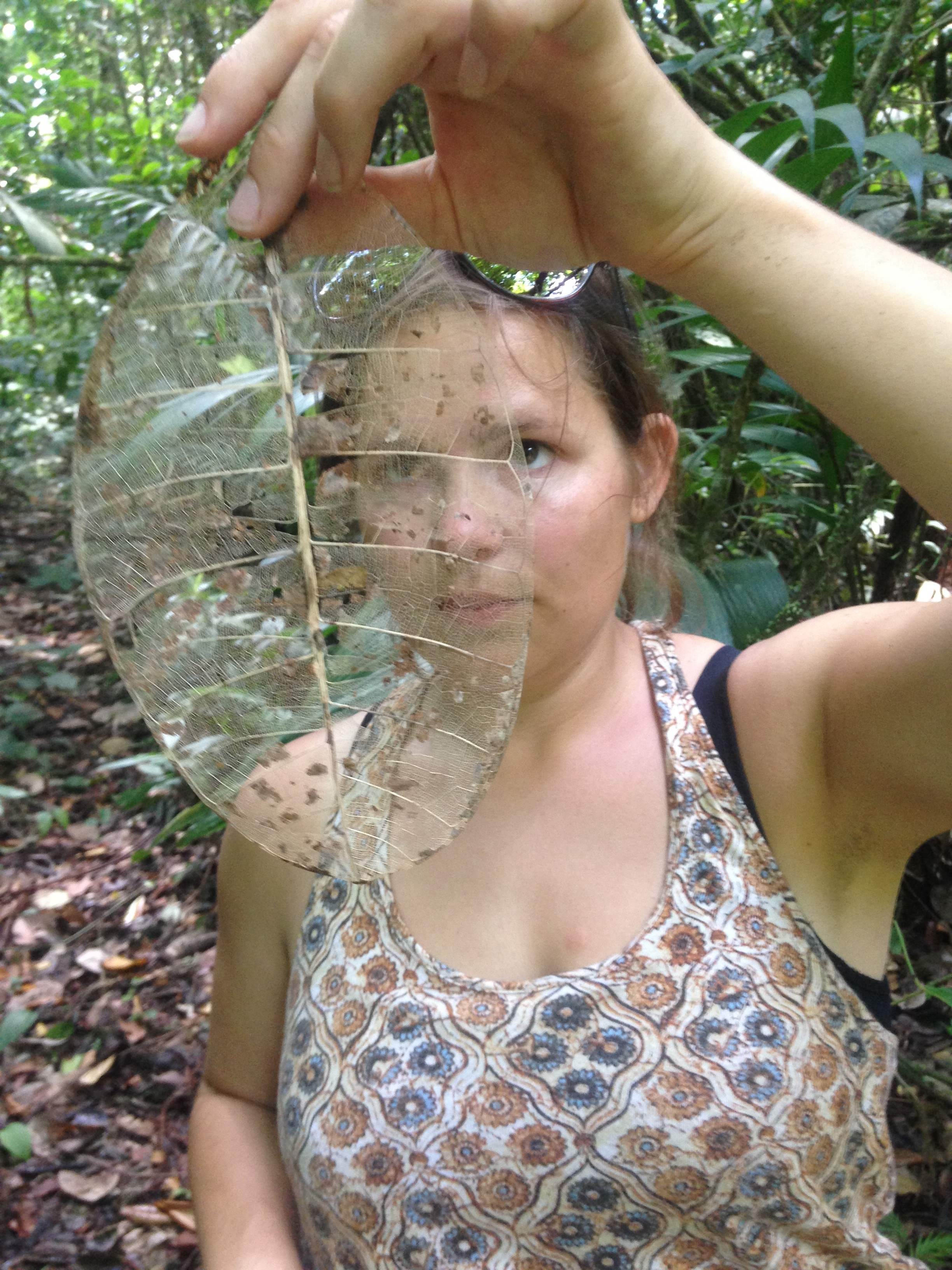 Lucky we were only hiking with a small bag, larger bags would have hindered our crawling under barbed-wire fences. 🙂 The trail was a very old trail that used to connect the two, but now one pice of land that borders the National park is privately owned the two no longer connect for most people.  We saw old signs and pieces of trail throughout the trek. The Toucan trail was not exciting we hiked it a bit but never saw any toucans, I would of not been satisfied with the toucan hike. We knew we really shouldn’t of been cutting trails on old trails and got a bit of a reprimand when we exited via the toucan trail. We offered to go back and the guy at the entrance said just not to do it again. That would of been a story if he would of said to go back.  It was time to head to the Arenal observatory to eat some lunch and do some more hiking. 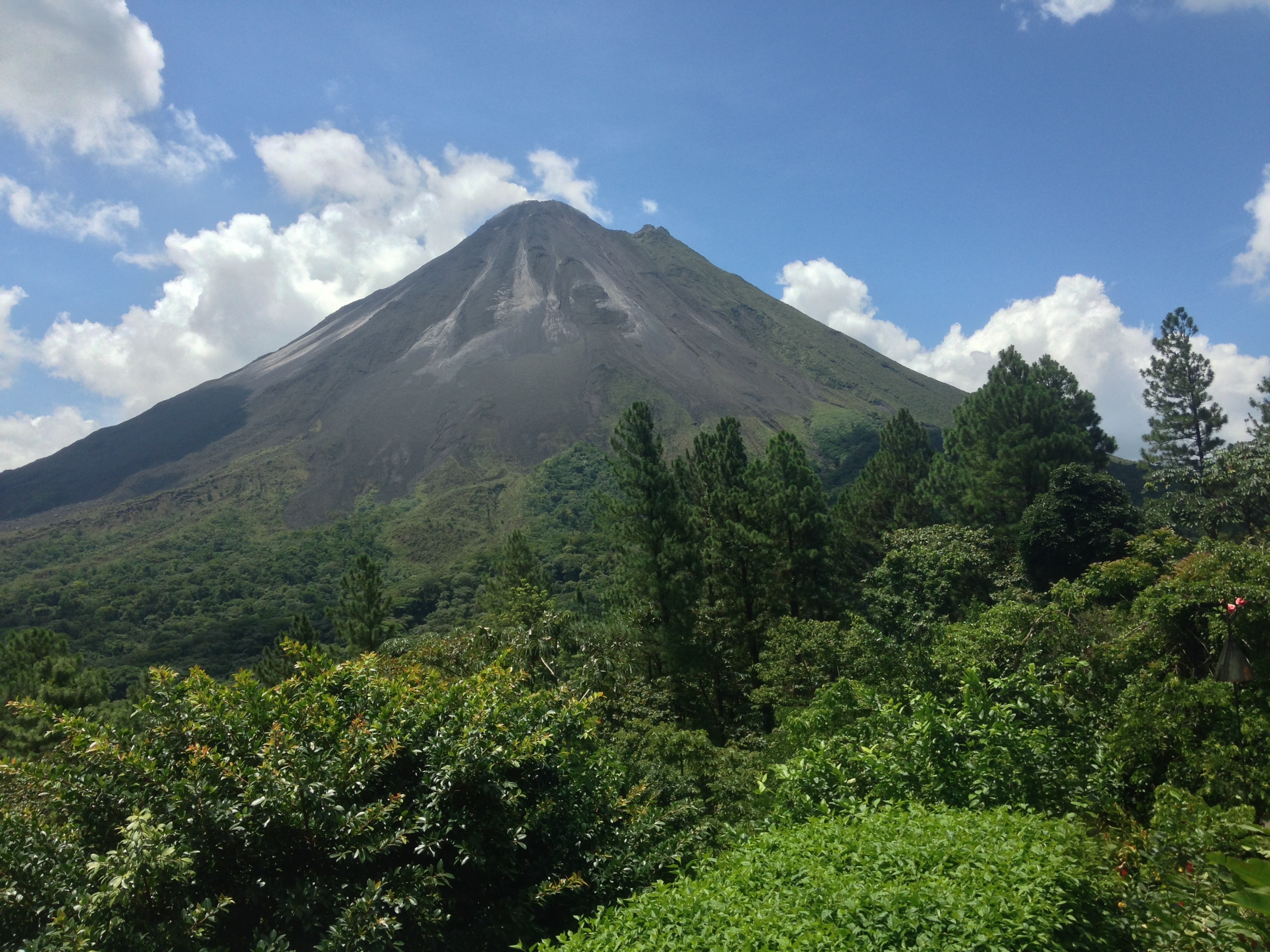 After a satisfying lunch of sandwiches we hiked up to Cerro Chato. Once we arrived at the trail it was time to start hiking up to this crater lake. After our bush whacking experience I was tired but we ony had four hours to get to the lake and back before making it to the road to catch our shuttle on our return trip. I had a rough trip up and I convinced myself I didn’t want to hike down into the crater to the lake. 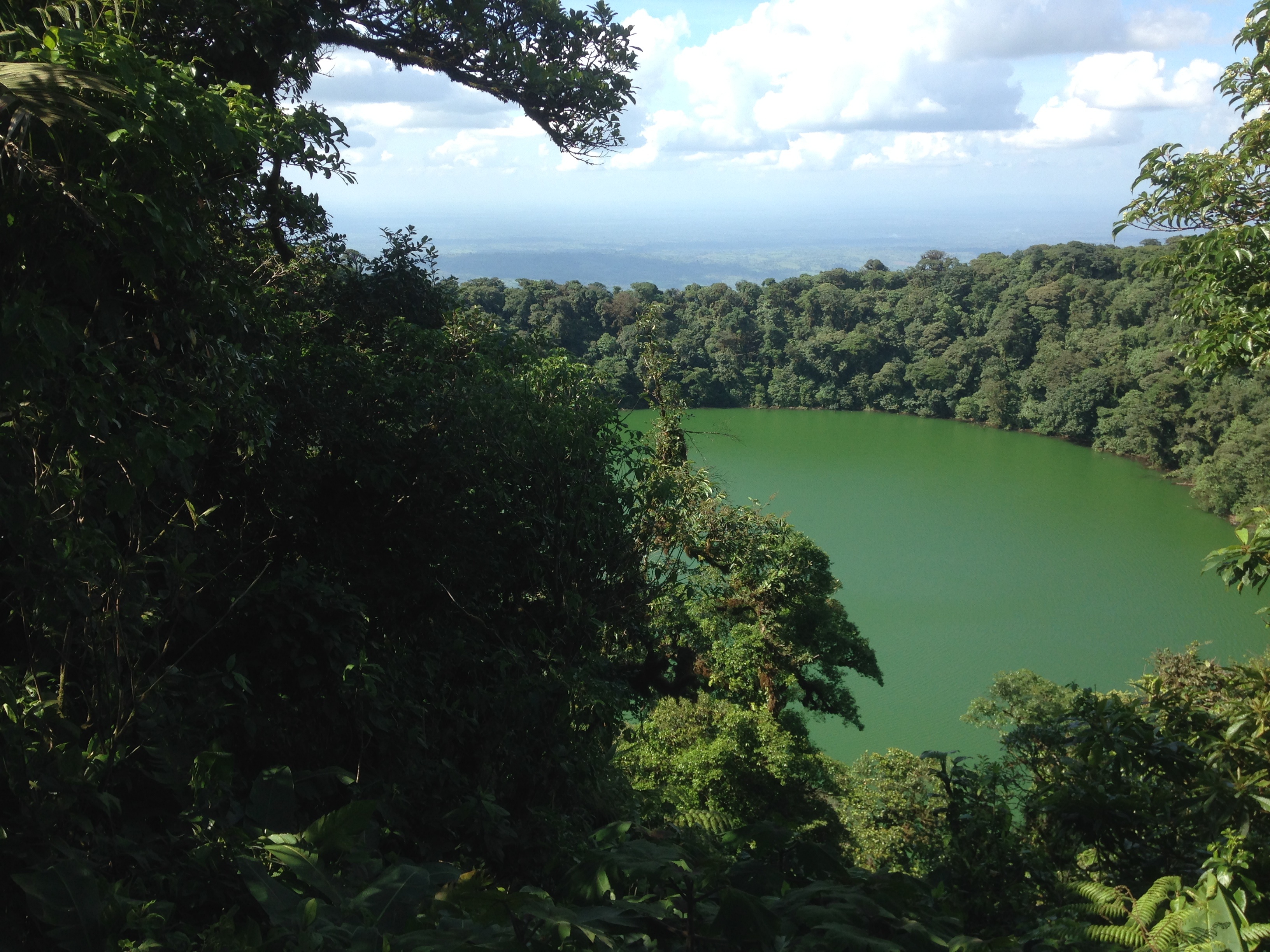 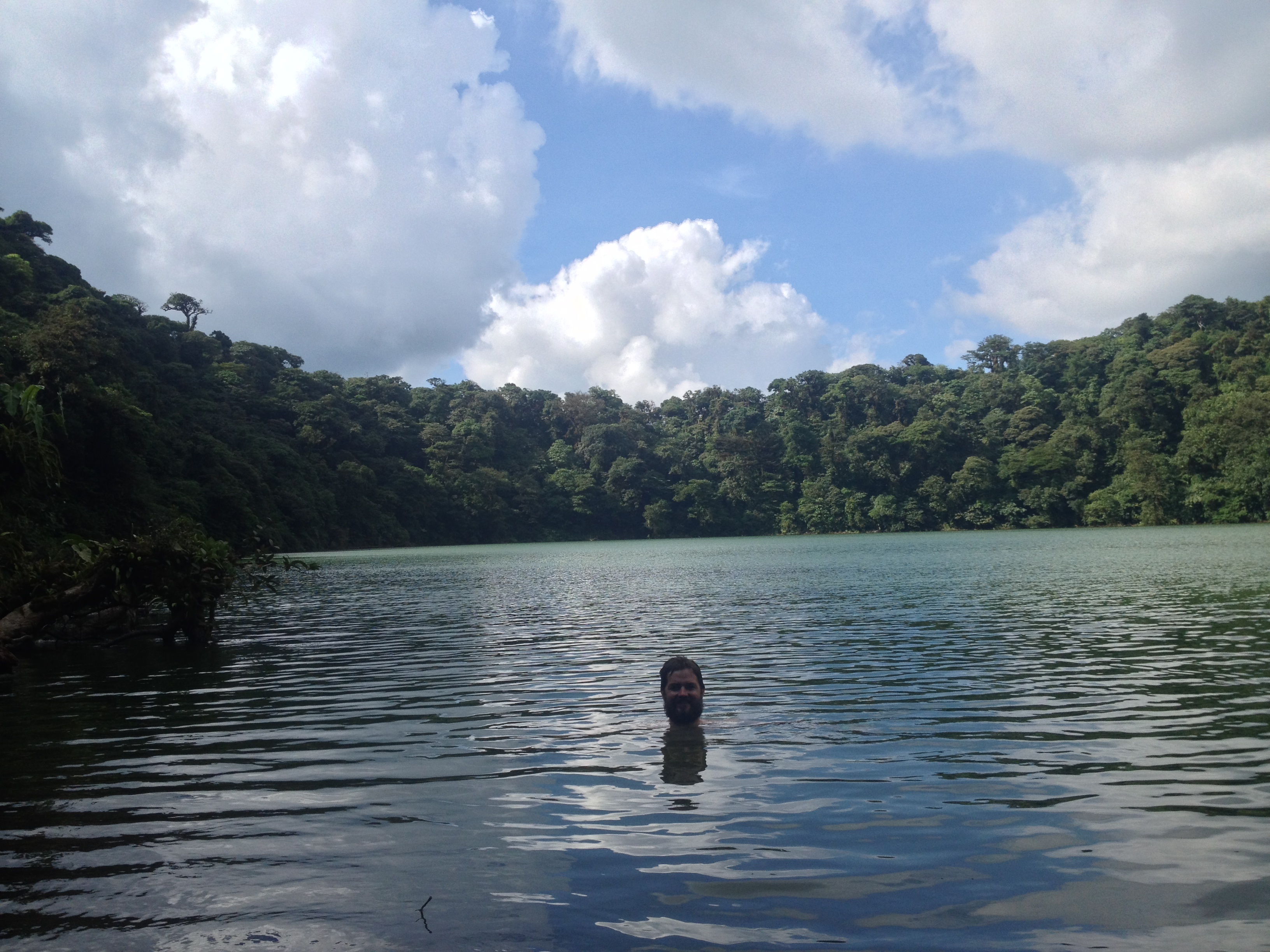 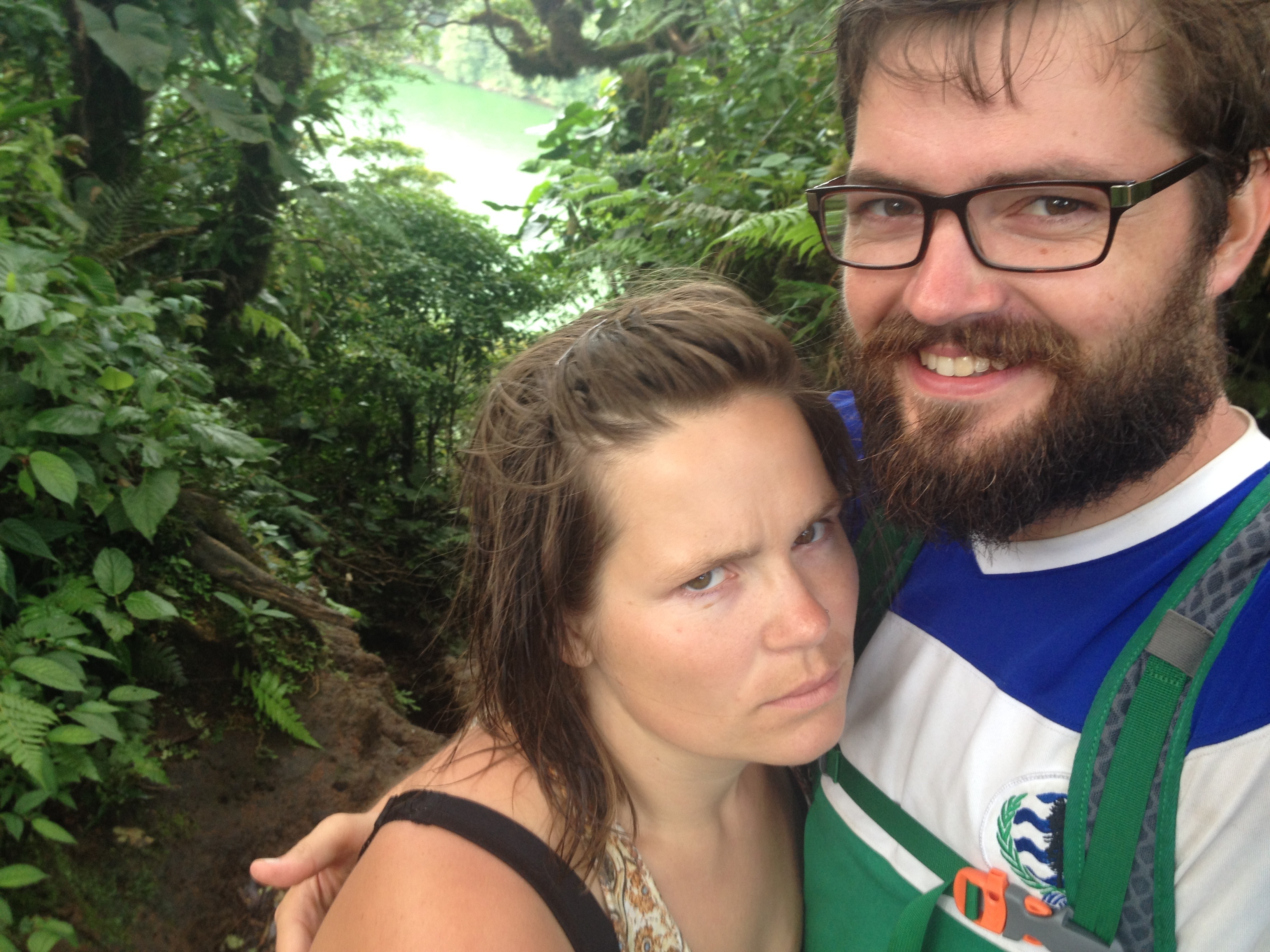 This is where Mateo really helped, regardless of what he says if he keeps moving so do I. I had a pretty grumpy hike, he also convinced me after we had reached the top to hike down to the lake for a swim. It felt so good to get in that water, it was even cold. It took about half the time to hike down the muddy steep slope. We power walked to the road side to catch our shuttle, and also someone expedited our walk by picking us up and taking us about a kilometer.  We treated ourselves to dinner at the hostel, much of the food they serve the guests is from the farm on the property and the cook is great, he make delicious healthy food. I can’t believe we have come this far completely by land, with the exception of the boat ride from La Paz to Mazatlán. When I look at the map it’s crazy to think how far a person can get without a plane involved.